Government Projects Contribute Positively to Economy Evaluation During the Covid-19

The global pandemic has affected the plans of various business entities regardless of their size, country of operation, and business model. Governments have been urged to provide financial assistance and expand their purchasing programs. Such actions have already been taken by numerous administrations across the world.

Despite the government's best intentions to preserve the economic relations in and between countries, some vendors have not succeeded in maintaining their pre-Covid-19 market shares. For instance, the French constructing sector’s prognosis of a 9.4% drop of market volume is to a great extent a result of slashed government spending by the French authorities which have to finance social programs supporting individuals and businesses of all industries.

However, other enterprises have been able to even solidify their financial position through government procurement schemes. One such example is the provider of public services and business process outsourcing Serco Group PLC (LON: SRP). It employs over 50,000 Pacific and the Middle East. For the last 2 years the company has been back on track in terms of people across 4 geographical areas: UK & Europe, North America, Asia of revenue and profit growth following a considerable restructuring program. The current turbulent times though have proven to be rather beneficial for the outsourcing company.

As per TenderAlpha.com, Bizportal.co proprietary data product, the consolidated inflow of cash during the first half of 2020 coming from US federal contracts amounts to a little over USD 500 m dollars while managing to secure 54 new awards to US government. This result is a 20% increase on a year-on-year basis.

The impact of the Group's European operations though has been significantly stronger throughout the same period of time. Serco has been involved in 4 major UK government framework agreements for different services related to the management of the current ongoing health crisis. The total amount of those future contract obligations stands at 1.9 billion pounds. The involvement of the company in those particular public procurement projects is viewed as a solid ground for the near-future development of the group by both management and investors. Below is a detailed chart breakdown of the aforementioned UK public procurement data:

If we decide to draw a parallel between those 2 years, it is apparent that government projects do in fact contribute positively to equity evaluation. 2019 is the first year since the beginning of the previous decade when the company has had a substantial positive net cash flow – 64 million pounds.

In 2020, the board of the company has stated more than once the overperformance of the business driven by the acquisitions in North America and successful government contracting.

Consequently, the stock has almost recovered to its pre-crisis levels in the span of three and a half months. That recovery was significantly aided by the unscheduled announcement made by the Group's management body on June 17th, 2020.

The Serco Group Chief Executive - Rupert Soames is adamant that "Being able to reinstate guidance for the full year reflects the resilience of our business, which depends for its revenues on governments rather than businesses or consumers, our strong order book, and growing confidence that our people and systems can adapt effectively to the challenges of Covid-19. Clearly, there is a more than normal degree of risk in our guidance, but we feel it better that we give some indication rather than none."

Mr. Soames makes indeed a fair point. Governments tend to be one of the most reliable business partners in global trade. Throughout this period of uncertainty and anxiety which have infiltrated the world economy companies should be more willing than usual to secure public procurement projects. The long-term process of reforming the company's business model and market strategies has proven to be the right approach for reestablishing investors' trust in its operations. TenderAlpha.com government contract awards database explores how important public contracting has become to the overall revenue structure of Serco Group. 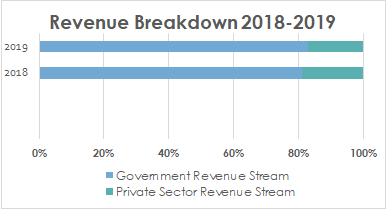 The Group has succeeded in maintaining the abovementioned revenue structure in 2019 along with a significant turnover increase in absolute terms. The UK outsourcer has generated 3.2 billion pounds in 2019 which is a 14% improvement from 2018. Management is aiming at achieving the same growth rate for 2020 as government sales have the biggest impact among all revenue-generating sources.

The conclusion of the report which happened to precede the scheduled half-year results announcement by almost 2 months is that reinstatement of guidance for the whole year is needed due to the Group exceeding expectations during these troublesome times.

According to the share price data on the Group’s website, its securities have made a 25% return during April, May, and June 2020 which is a definite indicator for the revitalized investors’ interest in the stock.

Mr. Martin Tsanov is the co-founder of BizPortal and a Product Director at TenderAlpha.com as the only global government procurement data product specifically designated for investment analysis. In this role, he is responsible for both product and business development with a special focus on quantitative and ESG research applications of the contract awards data. Mr. Tsanov has more than 10 years of professional experience combining exposure to investment and capital markets research with working in the public and think tank sectors in the U.S. and Europe. He earned an MSc in Political Economy from the London School of Economics and a BA in Political Science from Whittier College in Los Angeles, California.